On March 6th and 7th the first of a series of discussions titled “The IFLA Trend Report: scholarly and professional approaches,” took place in Mexico City.

This discussion considered the challenges and opportunities related to the five high level IFLA Trends in the digital environment. What would the main impact of these challenges be on National Library systems, Library & Information Science schools, and National Library associations in Latin America? Throughout the two days of discussions, attendees heard from Colombian, Costa Rican, Spanish and Mexican librarians and experts.

In Round Table no. 1 “New technologies and access to information as an IFLA Trend” speakers discussed issues faced by Government agencies including the Mexican National Archive, and Ministries, when they would like to structure and mine large amounts of public data. Felipe Martínez emphasized the engagement with and support of these institutions that must be provided by the IFLA/LAC Section members and its Standing Committee.

Speakers compared Colombian and Mexican realities regarding public access to information through both public and academic libraries. The Dean of the Mexican Librarians College considered the relationship between society, library associations and LIS schools, and the impact and utility of IFLA documents on libraries entities around the world. 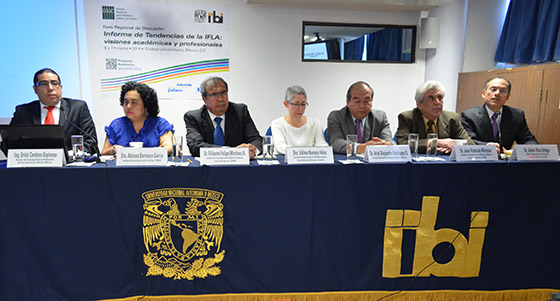 In Round Table no. 2 “online education and e-learning as an IFLA Trend”, speakers considered advancement in MOOC implementation LIS Schools in the LAC region, including the Costa Rican University LIS School, the UdeA – EIB (Colombian LIS School), The LIS School of Chiapas, San Luis Potosí, the Mexican Government LIS School, and the LIS School of the UNAM.

This round table highlighted the increased participation of Latin American governments in global discussions about Open Government. Speakers considered Mexico’s imminent taking on of the role of Co–President State at the Open Government Partnership, and the entry of the Brazilian Government in the LAC region into to this Partnership.

In Round Table no. 4 “hyper-connectivity and new voices’ engagement as an IFLA Trend” speakers talked about the rise of new voices and groups in some LAC countries. Speakers highlighted the importance of reading in connecting new users and voices to digital information. They also discussed hyper-connectivity as a powerful tool to reduce vulnerability in communities with disabilities.

In Round Table no. 5 “The global information economy and new technologies as an IFLA Trend” speakers addressed the role of libraries in the information economy. In several places in  the region, libraries are the only places where users can get access to information technologies. The Mexican Library System’ CEO said that while there are 7338 public libraries, only 3000 libraries have an Internet connection in Mexico.

In conclusion, it was agreed that IFLA professional units work collaboratively with LAC library associations, in order to encourage open conversations about experiences adapting to the information environment.

The next meeting will be hosted on June 12th and 13th 2014, and library and information practitioners will be able to participate remotely. Discussions will also be recorded. Listen and watch March discussions [in Spanish] below.